Cargo bikes have undoubtedly revolutionized urban mobility. They are a great solution for transporting cargo or children in a simple, ecological and efficient way. The Bunch electric cargo bike offers comfort and safety for transporting children, cargo, even your pets and its high-end technology makes it a replacement for the second car in a family. The name might sound familiar since the company appeared on an episode of Shark Tank.

This Bunch review aims to discuss the company’s innovative electric cargo bikes and evaluate how these bikes are better than other manufacturers in the market. But before starting the review, let’s have a slight recap of the Shark Tank episode. The founder, Aaron Powell, took Bunch to the show. It was episode 19 of season 12 and was aired on March 26, 2021.

All sharks appreciated the high quality and technology of the bikes. However, for the price, Powell received some backlash from Daymond John. Moreover, the Sharks also criticized the supply chain of Bunch for not having exclusive distribution rights from their Asian factory.

Powell responded to these concerns by sharing the company’s plans to become lower-priced, accessible and manufacture more custom-designed cargo bikes. He made a deal with only one Shark, Barbara Corcoran, who threw a crazy offer of $250,000 for 40%. After negotiations, she came down a little to which Powell agreed. In this way, Powell did not return from the Shark Tank empty-handed.

Bunch is the first cargo bike of its kind in the United States. It is a front-loading cargo bike that can transport children, cargo or pets. It offers four models of electric cargo bikes designed to transport two to four children or a week’s purchase thanks to a multipurpose cargo box. In its catalog, the Bunch Coupe stands out, the most sophisticated of all, with the capacity to transport two children (or pets) very comfortably and safely. Its distinguishing feature, beyond its technology and design, is its width that makes it easy to handle and can pass through any door.

Technically it is an electric tricycle. It is made up of a front-load box built-in expanded polypropylene (EPP) supported by two large-diameter side wheels, which also act as a handlebar. Inside, a safe seating area is created to transport children, thanks to safety harnesses with three-point fixings and a specific damping system. The rear part is that of a normal electric bicycle frame, consisting of a wheel, a saddle and a rear luggage rack, on which the electric traction system is mounted.

While their original models may have looked quite similar to other electric cargo bikes on the market, the company’s latest models are unlike anything you’ve seen before. Bunch’s new electric cargo bikes are known as The Preschool Cargo Bike and The K9. They have made The Preschool bike in bright yellow like a school bus plus a front door with the idea of ​​training preschoolers and daycare centers (or big families) to carry up to 6 kids.

The K9 is made specially to carry your dogs. There is still a bench with two harnesses for a couple of children, but The K9 is optimized for dogs. There is a fold-down cushion at the bottom to make your dog more comfortable, and the hinged front door opens downward for an easy four-legged transition. The bike also comes with a saddlebag bag to store your dog’s necessities while keeping him out of the dog’s path.

Are There Any Alternatives?

The alternatives are only a few but very high-priced than Bunch bikes. Bunch can keep costs low by manufacturing in Asia and operating a direct-to-consumer model. According to the company, most of their high-priced competitors fall into two categories:

1) European brands that manufacture their bikes in Europe (high labor costs) and then sell them in the US through dealers who increase the price.

2) Custom companies in the US that manufacture custom cargo bikes at a high labor cost. Bunch is an American company that uses overseas bulk manufacturing to significantly reduce its costs. They then sell directly to customers through their website or through distributors, like Amazon. 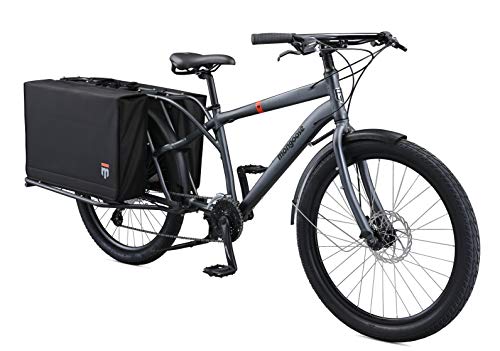 To conclude, it would not be wrong to say the Bunch bike can undoubtedly replace a car, especially in cities like New York. You will only need a suitable parking space if you do not have a garage. Its size, or its storage capacity, is its advantage and can be immediately used by your whole family. This cargo bike can accommodate up to six children and even your pets safely. To these advantages, we must add that they can be much faster than any motorized vehicle in short distances if we take into account that they can access all bike lanes and many pedestrian areas.

I've loved Shark Tank ever since the first time I saw it. I always found myself looking up products and services after the show ended, trying to find out more about the company or founder. Sometimes I couldn't find any more info... That sparked the idea of creating Mertado, where I review the products and services that have been on Shark Tank. It's a tiring job, but someone's got to do it... aaaaand for that reason, I'm out!